Two conversions to 5e. First, from Ravenloft: Realm of Terror, Strahd’s personal skeleton minions. A nice complement to the Strahd zombies already presented in Curse of Strahd, they are the same CR and you could very easily swap them in their place.

Unlike common skeletons, Strahd’s creatures still bear bits of leathery flesh, as well as shreds of clothing. Otherwise, they are nothing but bones. Their motions are swift but jerky. In the blink of an eye, they can attain full speed from a dead stop. They have no odor other than the faint suggestions of dust and freshly dug earth.

Strahd skeletons lurk in dungeons, graveyards, or anywhere in Castle Ravenloft. The Count has been known to post them anywhere in Barovia where they may be of service. A band of skeletons supposedly lies in waiting somewhere beneath the surface of the River Ivlis.

While in Barovia, they can report back to Strahd if it is a part of their orders. It takes a full turn to establish communication, assuming he bothers to respond. They can only communicate a simple feeling of success or failure.

Only Strahd Von Zarovich knows the arcane ritual that brings about their creation. For raw material, he requires human skeletons that still include the skull and 90% of the bones. What other foul components might be required are known only to the dread master of Ravenloft. 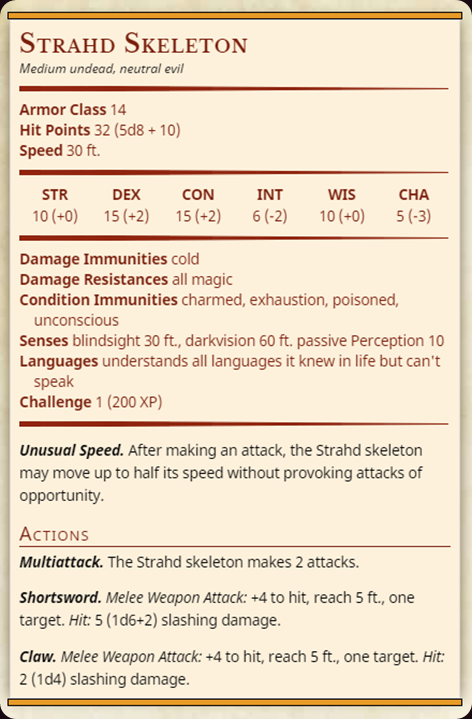 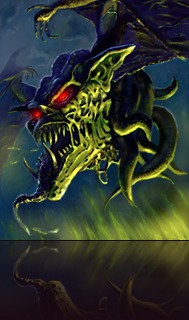 Next is one of my favorite monsters from older editions, the Vargouille, with a crazy kiss ability that can turn your players into one these creatures. It will be released later this year in Volo’s Guide to Monsters, but until then you can use this version!

The vargouille has a hideous, humanlike head with batlike wings, fangs, and a crown and fringe of writhing tentacles. Its eyes glow with an eerie green light, and it wears a horrible sneer. A vargouille is larger than a human head, typically between 12 and 20 inches high with a 15- to 35-inch wing span.

These hideous monsters flop and flap through strange and haunted skies in constant search of fresh souls to torment. They harbor a malevolent delight in causing pain and anguish like a sadistic carrion bird of prey.

Vargouilles attack by swooping in on their opponents, shrieking them into paralysis, and then biting them with rows of razor-sharp teeth. When multiple vargouilles take up a common cause and fight as allies, they overwhelm their victim with bites and shrieks, tearing it to shreds.

A vargouille's low power and hideous method of reproduction make for a dangerous combination. Vargouilles can reproduce rapidly through their kiss, quickly growing their population out of control into nightmarish proportions.