Today we have two new conversions of some older edition undead monsters. The swamp marsh dwelling Bog Mummy and the cursed undead priests known as Huecuva (who first appeared in the original Fiend Folio). 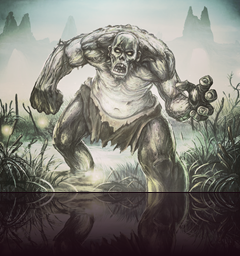 Wherever a spark of unlife or negative energy touches a corpse naturally preserved by swamp mud, the result is a bog mummy. Bog mummies are always found roaming the place where they arose, and very rarely venture from it.

In the Ivlis Marsh of Barovia, the powerful hag-mother, Baba Lysaga, provides the spark of negative energy needed to create bog mummies. The skin of the bog mummy is leathery, tanned by the mild acid of the peat bog. It is clothed in tattered rags, and the remains of the thongs that bound its hands and the strangling cord that bit deeply into its neck dangle from its body. The monster has incredible strength and its rotting slam attacks are powerful.

Bog Mummies hate all living beings and stalk their prey with infinite patience and great stealth. Virtually without intelligence, they practice simple cunning to keep them safe and to bring them upon their prey when that person is alone.

Water has no adverse affect on bog mummies, and they take advantage of this by lurking in pools, lying in wait in the shallows at the edge of a stream, or blending with the dark water of a wayside swamp or marsh. It can rise from its hiding place without a sound and moves with silence wherever it goes. The soggy monster is not affected by normal fire and suffers only half damage from magical fire. Protected against fire and water by the very nature of the bog from which it comes, and resistant to most weapons, it is fearless. Anyone seeing the mummy, however, must resist its frightening despair.

Languages the languages it knew in life

Multiattack. The Bog Mummy can use its Despair and then make a Rotting Slam attack.

Rotting Slam. Melee Weapon Attack +6 to hit, reach 5 ft., one target. Hit: 18 (4d6+4) bludgeoning damage and 14 (4d6) necrotic damage. If the target is a creature, it must succeed on a DC 14 Constitution saving throw or be stricken with the with bog rot disease. The target gains one level of exhaustion, and one of its physical ability scores (initially chosen at random between Strength, Dexterity and Constitution) decreases by 3 (1d6) for every 24 hours that elapse. If the disease reduces any of the target's physical ability scores to 0, the target dies, and its body turns to dust. The disease lasts until removed by the lesser restoration, greater restoration, or heal spells or more powerful magic effects. Any humanoid that dies from bog rot becomes a bog mummy in 1d4 days unless a remove disease is cast (within one day after death) on the corpse or the creature is brought back to life (raise dead is ineffective, but resurrection or true resurrection works). Spawn are under the command of the bog mummy that created them and remain enslaved until its death. They do not possess any of the abilities they had in life.

Despair. Each creature of the mummy's choice that is within 60 feet of the mummy and aware of it must succeed on a DC 15 Wisdom saving throw or become frightened for 1d6 rounds. A creature can repeat the saving throw at the end of each of its turns, ending the effect on itself on a success. If a creature's saving throw is successful or the effect ends for it, the creature is immune to the mummy's Despair for the next 24 hours.

The huecuva is an undead spirit similar in appearance to a skeleton, but more dangerous 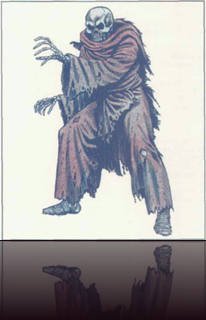 and more difficult to dispel. The huecuva appears to be a humanoid skeleton of normal size. The bones are covered by a robe that is little more than tattered rags. Huecuva roam the dark places of the world, often in forbidden subterranean realms. Legends tell that huecuva are the restless spirits of monastic priests who were less than faithful to their holy vows. In punishment for their heresies, they are forced to roam the dark. Their spirits, appearance, and holy powers have become perverted mockeries of their old selves. The tatters they wear are the unrecognizable remains of their monks' robes. Instead of healing, they can kill with a diseased touch. Instead of helping others, they seek to kill all who still live. Even their old power to turn undead is now used to help them resist the efforts of others to turn them.  Some huecuva are nomadic and constantly wander on a pilgrimage to nowhere. Even these are mockeries of real pilgrimages.

Huecuva may assume the form of people they have met in the recent past, such as a past victim or a member of the party that encounters the monsters. If the huecuva are in their lairs, they may assume their old (living) appearances. Groups encountered on the surface may appear to be pilgrims in procession. They use this power to assume a nonthreatening shape in order to get close to an unsuspecting victim or avoid an undesired encounter when pursuing a specific prey.

Huecuva retain dim memories of their old lives. Their lairs are decorated as grotesque mockeries of their old abbeys and temples. The corpses of past victims may be used to represent parishioners. These corpses may retain their original possessions, which may represent a large portion of the huecuvan treasure trove. Other accumulated treasures may be scattered around the mock altar as decorations or offerings. 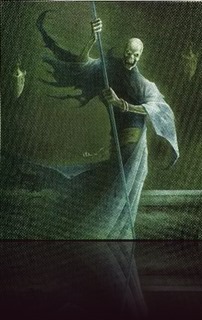 Languages the languages it knew in life

Aura of Faithlessness. The Huecuva and all undead within 30 ft. that can see the huecuva have advantage on saving throws against effects that turn undead and against attacks that deal positive energy damage.

False Humanity. During the day, a huecuva is cloaked in an illusion that makes it look, sound, and feel like the living creature it once was. This effect functions similarly to disguise self—if a creature interacts directly with a huecuva, it can attempt a DC 14 Will save to see through the illusion. Regardless, the huecuva's scent never changes—it always exudes a faint stench of grave dust and decay. At night (regardless of whether the huecuva itself knows night has fallen) this illusion fades and reveals the creature for what it truly is.

Bolster Undead. Each turned undead that the huecuva can see within 60 ft. may immediately make a saving throw against the turning DC to end the turning effect. Each undead creature that makes its save may use its reaction to move up to its speed, as long as it ends closer to the huecuva or the huecuva's enemies.