Here are six new magic items for D&D (5e, but really they can be inserted easily into any edition or any other fantasy RPG), magic candles (and one magical incense)! 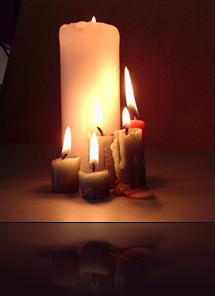 The gypsy folk known as the Vistani, traveling people living under the protection of Count Strahd von Zerovich in the Domain of Barovia, have very glamorous and mystic ways about them. They carry magical trinkets, potions and other treasures. Among their precious mystical arsenal you will find a varied selection of enchanted candles. Magic candles, like most gypsy treasures, seem most ordinary and do not reveal their magical nature easily. These candles usually work their magic in the area of the candle flame’s light though some rely on the candle’s smoke for their magical effect. Magic candles may be snuffed and their magical effects used again later. The Vistani will never openly share these candles nor will they ever reveal the exceptional secrets behind imbuing spells into wax.

The Vistani are very elusive and prefer to keep their operations hidden. They use this stout dark pillar candle to hide from spying eyes that may be upon them.
Anyone standing within the 10-foot radius of this candle’s light is hidden from divination magic. They cannot be targeted by such magic or perceived through magical scrying sensors.

The Vistani, who are merely human with human eyes and limited vision, burn magical twisted crimson candles to help them see through the blackness of night.

This candle produces a subtle amount of heat but no visible flame or light when it is lit, making its use virtually undetectable at a distance. Candles of dark sight actually draw in tiny amounts of ambient light so that anyone within a 10-foot radius of a lit candle is effectively granted Darkvision to a distance of 120-feet.

Candle of Protection (from Good and Evil)

Though the Vistani of Barovia are Strahd’s chosen people there are still plenty who seek protection from the horrors of the realm. This semi-opaque white candle is used to ward a small area against both good and evil creatures.

When lit, the candle produces a 10-foot radius of light that protects all creatures named by the lighter who are also within its candle light against certain types of creatures: aberrations, celestials, elementals, fey, fiends, and undead.
The protection grants several benefits.

The creature can’t willingly enter the light by nonmagical means. If the creature tries to use teleportation or interplanar travel to do so, it must first succeed on a DC15 Charisma saving throw. 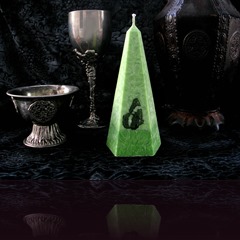 The Vistani use this sickly green pyramid-shaped candle to detect hags and witches in their presence. These candles are valued treasure and tools to witch-hunters. The wax contains a mixture of rare swamp foliage, such as weeping toadstools, crimson algae, and blackened reed grass.

When lit, the candle produces a yellowish-green flame in a 30-foot radius and copious amounts of foul-smelling smoke that drifts heavily and pools along the ground like a creeping fog. The flame and smoke are detectable to most creatures, but smoke produced by this candle cannot be detected by any practitioner of witchcraft, including Barovian witches and hags, nor can the candle’s light be seen by them.

Vistani keep plenty of Liar’s incense around when they feel the need to bend the truth to outsiders (all the time). These ugly chunky sticks of incense have the sweet but pungent smell of Barovian wilds imbued in them.

While burning, the incense create a misty aroma in a 10-foot radius (more than filling the average Vistani tent) where all lies and deceptions are enhanced. Anyone who attempts to discern the truth through skills, like Investigation and Perception, are made at Disadvantage. Any Zone of Truth or similar spell fails to function within the area of the incense. As a boon, usable only by those who are aware of the incense’s magic, the smell of the incense enhances ones ability to deceive, granting Advantage on skills checks to lie, manipulate, steal and cheat (Deception, Persuasion, Sleight of Hand).

A great boon to any traveler, this thick, white, two-foot tall candle silently floats behind its master.

To activate a servant candle, the master must speak the command word and gently toss the candle into the air. The candle ignites with a real flame and begins floating two feet behind its master. The person who activates the candle becomes its master until it is activated again. Servant candles can only follow simple instructions like “wait here”, “move there”, etc.  The heat from the flame does not actually melt the candle’s wax but it can produce a drip of hot wax on command. A servant candle that moves more than 60-feet from its master drifts slowly to the ground and extinguishes its flame until reactivated again. The master of the candle can speak its command word and cause it to emanate the light or daylight spell. Once used, the daylight effect can't be used again until the next dawn. The flame cannot be blown out or snuffed by anyone other than the master or a dispel magic spell.