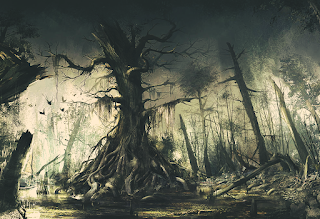 The Woetree is a species of enormous dead-looking trees with roots reaching miles into the Underworld where they drink upon souls for nourishment.

Parasitic boring maggots fester upon the tree, suckling upon the souls within the tree until they grow into a carrion crawling two-headed worm beast. When the corpse crawlers kill sentient creatures they harvest the creature's soul, process it in their guts and store it inside of the tree by spitting up a smoky greenish-blue sap-like substance. When enough souls (roughly 1 soul per foot of the Woetree's height) are stored within the sap, a skull-shaped seed will grow within the upper roots - to be later harvested by cultists. The Death Gods of Xibalba have their cults (particularly the cults of Hun-Came ("One Death") and Vucub-Came ("Seven Death")) plant these seeds along necrotic ley-lines around the world. 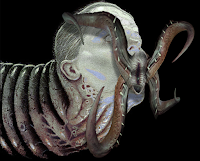 Corpse Crawler
Many-legged, segmented worm stretching 9' long. A human-looking face on both ends of its body with two pairs of four tentacles stretching from their inside their mouths.

-Actions-
Paralyzing tentacles x8 (4 from each end), +3 to hit, causes paralysis for 2d4 Turns (10-minutes) (save versus paralysis). Paralyzed victims will be level-drained (1 level/round) if the corpse crawler is left to feed.

-Defense-
A Corpse Crawler's two-headed nature means they are unable to be back-stabbed.

-Maggots-
Corpse Crawler maggots have 1HP; they do not attack other creatures but incidental contact can call for a save vs paralysis. Each tree hosts 2d20 maggots.

The soulless husks of bodies that remain after the Corpse Crawlers feed are dragged by the crawlers and impaled upon specialized roots that burst upward like sharp spikes, appearing up to several miles away - luring new victims towards the Woetree.

Sentient creatures that die in the viscinity of the Woetree (such as being crucified against the tree) have their souls absorbed directly into the tree. There, they are imprisoned - circumventing any afterlife or Procession of the Dead that would await or be promised to them. 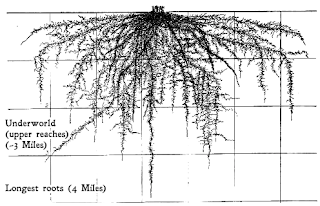 Severing the gargantuan bundles of roots beneath the tree (and thus severing its connection to the Underworld) will effectively kill the Woetree, any corpse crawlers that remain nearby will scatter and attempt to find another Woetree. Nothing else, not even burning the Woetree to a stump, will prevent it from regrowing at an alarming rate (to full size in a matter of months).