“Der Belsnickel!” screamed the children as they ran from the frightening creature!

Belsnickel is one of the many dark gift-giving companions of Saint Nicholas. A disheveled, crotchety bearded man, wearing stinking furs and a devilish mask with a long tongue. His limbs are long and his body is ragged, covered in tattered and dirty clothes. He carries a long hazel switch with him, which to beat naughty children. But also a sack full of gifts - nuts and candies for good children which he will toss on the floor. If the children jump too quickly they may be struck by Belsnickel's switch. 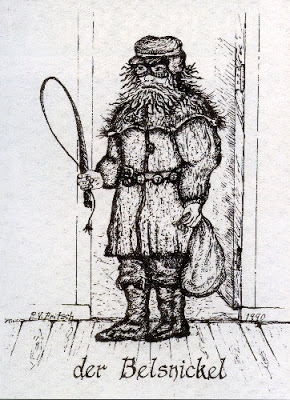 There is a 50% chance when encountering Belsnickel that there is a boy (1HD) named Black Peter assisting him.

He may have vexxed you as a violent vagrant or a did you dirty as a delirious drifter. It is the nature of the Belsnickel, who kidnaps mischievous children and drags them into the forest for punishment. He will often give these wicked, spoiled kids a chance to redeem themselves who are made to dance, do tricks, sing or recite poems before the Belsnickel. However.. you decided for a more direct approach to rescuing them - good old fashion murder. Now the Belsnickel lies in a bloody mess beneath you, what's he carrying in that sack?

The sack itself functions as a Bag of Holding that can only store items intended as 'gifts' (either good or bad).

Initially operating the gun requires 3 successful consecutive Intelligence checks, a single failure resets the process, failure by 3 wastes a charge, fail by 5 destroys the Lightgonne, 2d8 damage. If the gun is explained to you, +4 to your check.